Every Time They Went to the Park

Every time they went to the park, a sick feeling came over her.  There was all kind of equipment for her older child to enjoy.  For her youngest, it was different.  She couldn’t even get his wheelchair close enough to the playscape so that he could at least feel like he was there with his brother.

She decided to write a letter to the local parks department, explaining the situation and asking if at minimum, an accessible swing could be installed at the local park.  Within a week, she had received a positive response and a swing was installed. Her son, and other children with a disability, would now have a chance to enjoy playing alongside the other children.

As her children grew, the park became less of an interest and she would find that, outside of school, her son didn’t have the opportunity to spend time with other children.  It would tear at her heart.  He was a typical nine-year-old boy who wanted to do what every other nine-year-old boy was doing, which included spending more time with friends and less time with mom and dad.  A time when all of the children on the street were playing a game together, while her son sat in his wheelchair, watching her water the flowers, was particularly gut-wrenching.

One day, three classmates who lived in the neighbourhood, “popped over” unexpectedly. To the ordinary person, this may not seem like a big deal, but to a parent of a child with multiple disabilities, it was a HUGE deal!  When the doorbell rang and three young girls asked if he could hang out, she wondered if she had heard correctly.   They all went to the backyard and “hung out” like typical friends would do.  To see her son hanging out with friends, was reassuring; it took away her despair and it gave her hope for the future.

This week, the Windsor City Council approved plans for a local baseball association to move forward with construction of a Miracle Field and “agreed to form a partnership with the association to work on an accessible playground, a path around the park and a stage.” (Windsor Star, June 23, 2017)

According to earlier reports, the City of Windsor had recommended selling the land for new housing and commercial development, touting the revenue from the land, $1.1 million in development charges and $200,000 a year in property taxes.

The decision by city council to approve plans for the Miracle Field will certainly delight people who have a disability and their families.  From a broader perspective, the decision has much deeper meaning and is a model for good principles and practice for all communities.

According to renowned psychologist, Abraham Maslow, the third level of human needs is interpersonal and involves feelings of belongingness. Regardless of ability, all people need to feel a sense of belonging among social groups.  Friendships and social connections are important to everyone and reduce loneliness, social anxiety and depression. A decision that will give an opportunity for everyone to participate in a recreational activity shows true value for inclusion. 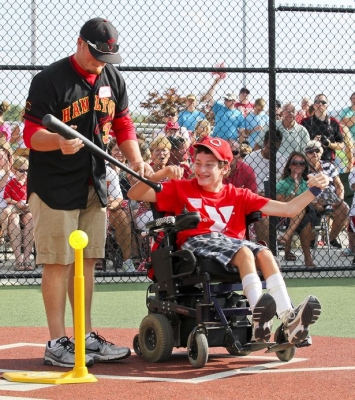 Listening to the Grassroots Voice

A decision was made based on the desire and aspirations of community residents, over an opportunity to increase revenue for the City.  Engaging with a local baseball association for the project, shows a true commitment to residential leadership and partnership in decision making for what is important to the neighbourhood.  The grassroots voice is the catalyst for making decisions that are mutually beneficial for all.

It is no secret of the challenges that children and adults who have a disability, along with their families, face on a daily basis.  This decision demonstrates respect and gives people confidence and optimism for their worth and significance in society.

According to an article in Psychology Today titled, “What is Compassion and How Can It Improve My Life?”, Licensed Marriage and Family Therapist, Beverly Engel, defines compassion is defined as “the ability to understand the emotional state of another person or oneself.” This kind of awareness and insight can lead to a desire to help.  The physical and emotional needs of all people will be supported by this decision.

I can certainly say that I was more that pleased to hear about the decision to approve the Miracle Field.  As a parent of a child who had multiple disabilities, I know the pain and emotional distress of seeing your child isolated and without much to do in the community. Professionally, I have worked tirelessly to support authentic engagement, and the enabling of community members to influence decisions and participate in planning and decision-making for new programs and new development.  I have heard numerous appeals made by people, to bureaucrats and government officials, asking them to listen to and act upon what is important to citizens, over and above a decision based on revenue or individual achievement.

This decision is a true accomplishment of what can occur if we remain grounded in the desires  and wishes of the people, a decision will evolve into the right solution.