How I Became a Believer of Inclusive Education: A Parent’s Story 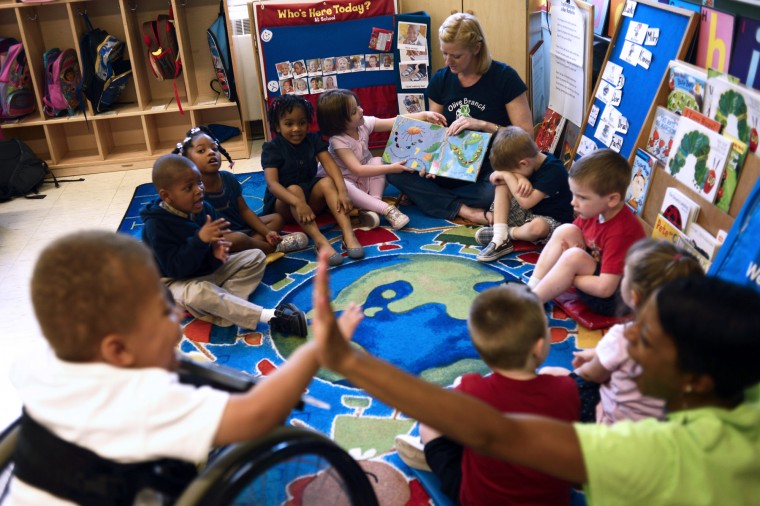 I have to admit; I wasn’t always a believer in inclusive education.  Having my child go to school with all of the normal kids?  That didn’t seem possible.

The idea was first introduced to us when Eric was about 2 years old.  One of the early intervention specialists had suggested that it might be time for him to go to preschool and strongly encouraged us to enroll Eric into an inclusive community school; a school where all children went, regardless of ability.

“Are you kidding me?”  I thought.  “There was no way that would work.”

Eric was a complicated child.  He would scream for most of the day and rarely took a nap.  All of his food had to be pureed and he used a g-tube for all of his liquids. Eric had reflux so any food that went in, would often come out.  Eric could not walk and he used a wheelchair.  He was not able to sit up on his own and required a special seat to support him in a regular chair.  He couldn’t talk and he was hearing impaired.

“How could they ever take care of him?”  I wondered.   I certainly didn’t want to impose this task on anyone; this was our responsibility”, I believed.

Nevertheless, we decided to enroll Eric into a preschool that was more tailored to children with a disability. I was still not convinced that I should hand my complex child over to anyone, however the comfort with this school, was that he would be surrounded by people who specialized and focused their work on teaching and supporting exceptional children.  It was a safe decision.

Every morning, when the school bus arrived, Eric would get excited.  This told me that he enjoyed where he was going.   He came home happy and felt comfortable with our decision.

One day, (about six months later), I had to pick Eric up from school for an appointment.  As I sat in the lobby to wait for him, I had a major epiphany.  I suddenly realized that while this was a good school and Eric was enjoying himself, he and all of the other children who attended, were isolated from the rest of the world.

“This wasn’t right”, I thought. “I had to get him out into the world with everyone else.”  It was the only way that others would get to know him and by doing so, they would begin to learn about the kind of support he needed to live in the real world and hopefully make changes accordingly.

As soon as I got home I called our family support coordinator and said that it was time to enroll Eric into an inclusive preschool.  I could sense her delight and planning began for this important transition.

This time, I had no doubt or worries.  It was the right thing to do.

After touring a few options, we chose a school called Storybook Early Learning Center.  The Director of the school was warm and welcoming and the staff were friendly and approachable.The overall attitude was that Eric belonged there and felt confident with him being there.  We worked as a team to ensure that the proper equipment and supplies were in place and off he went.

It didn’t take long before pictures were sent home of Eric and his friends.  It felt so good to see other children talking to him, holding his hand and involving him in their play.

And remember what I had said about getting the kind of support he needed once others got to know him?  Well, the preschool Director quickly understood how challenging it was to support Eric.  When he would get ill, she knew that I was taking care of him by myself and that it could be quite difficult.  So, she applied for flexible funding to our local government office that was responsible for Children’s services.  This meant that the funding that was provided for him at preschool could be unlocked in a sense, so that on the days when he was too ill to go to school, a staff from the school would come to our house to assist in his care.  Guess what?  It was approved!

After that, I knew that we had made the right decision, for Eric, for us as a family, and for everyone else in the world.

Taking that first step was quite intimidating.  We didn’t know what to expect.

Looking back, we know that it made a difference in our lives. We no longer made decisions based on what was comfortable and safe, but rather on what was going to raise awareness, teach others, promote change, improve accessibility, foster inclusion, and most of all, provide a better life for Eric and all children with a disability.

Everyone is on an individual journey, at their own pace.  You will know when it feels right for you.  I believe that teachers and educators want to make a difference in the lives of all children.  As a parent, you can provide the leadership and the inspiration.

Believe it and you will see it!