If You Die Before Me, Will You Give Me a Sign?

The Robin in the Window

If you die before me, will you give me a sign?

I remember a story from my childhood. It was about a man who was terminally ill and he had a few months to live. He had pr 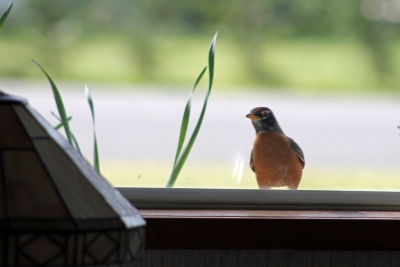 omised his wife, that after he had passed, he would give her a sign, something to let her know that he would continue to be around her.

According to the story, the couple had a favourite house plant that was failing. It hadn’t bloomed in over a year and there didn’t seem to be any hope that it would come back to life. Once her husband had passed, the mourning widow had decided that she was going to throw it out. She had tossed it outside and had forgotten about it. One day, in early Spring, she had gone out to the side of the house where she had tossed the plant, and much to her surprise, buds had formed. The plant was going to flower! Taking this as a sign from her deceased husband, this gave the woman renewed hope and comfort that while he was no longer physically with her, the spirit of her beloved husband was eternally around.

This story remained a part of my memory for many years. Whenever I would hear people talk about life after death, I would think of this story.

After losing our son, Eric, I have my own story to tell.

It was about a month after he had passed away, late March, or early April. The weather was getting warmer, leaves were sprouting on the trees, the scent of green and new life was in the air. Spring was definitely on its way.

One morning, as I opened up the blinds in our bedroom, I noticed that there were a lot of birds hanging around the house. “Robins, the first sign of spring”, I thought. Yet, there were so many of them, that it made me pause and take extra notice.

As I walked into the living room, where two big windows offer a view of our back patio, I once again noticed the large number of robins that were on the patio. While I took it as a sign of Spring, a gut feeling told me that there was something more.

As we sat down to have our morning coffee, my husband, Lou, made a remark about the number of robins that were in our yard. He said that he hadn’t ever seen so many birds in one spot. I looked at him and I agreed. We both looked up and the emotion in our eyes, silently said that this had deeper meaning.

I must note that the very fact that Lou took notice of the birds was in itself remarkable. He wouldn’t usually pay attention to that.

A few hours passed and while there were still a few birds hanging around, most of them had gone. As I went about my day, a distinct sound came to my attention. It was a constant, steady sound. Oddly, it reminded me of the rhythm that I would hear as Eric would tap his arm on the side of his wheelchair. Tap. Tap. Tap; not too slow and not too fast. Tap. Tap. Tap. Where was this sound coming from?

At the same time, Lou was approaching me and asked if I had heard that tapping sound. I said that I did and both of us embarked upon finding its source.

At one of our front windows, we discovered a robin. The bird was perched on the window sill and was rhythmically and steadily, hopping up about 4 feet, and tapping its beak onto the window.

This was very uncanny as it truly reminded us of the beat of Eric tapping his arm on the side of his wheelchair.

Talking to a robin as if it were my son, Eric. “This was very weird”, I thought.

We were in a good place emotionally. We had appreciated the time that we had shared with Eric and had understood that there was a likely chance that he would pass away at a young age. It was a reality we had faced each and every day. So to say that we may have been in denial, or that we were trying to hang on in an unhealthy way, was simply not the case. Yet, there was something about this bird that I couldn’t let go.

Later that evening, I took notice of Lou, as he was doing some research on the Internet. This was not unusual, however it was the nature of his research that was different. He was investigating the meaning of a bird, after there has been a death. There were so many stories of the consistent presence of a robin, after a loved one has died. We further read that some cultures believed birds embodied the spirit, or the soul of someone who has passed. Further to this belief, the ancient Egyptians would carve a bird on the tomb of their loved ones to symbolize eternal life.

“You see,” I exclaimed. “There is something about this robin!”

To my further amazement, Lou seemed to agree with me. That in itself told me that I was on to something.

To try to prove myself wrong, I did an investigation of my own. I explored the scientific reason that a robin may tap on a window. My search uncovered that a bird, as they see their reflection in the window, may think they see another bird and try to fly toward it. I discussed this with a few scientists and they said that if the bird was flying toward its own reflection, it would do just that and fly toward the window. This was different.

A year later, we were on a family vacation in Disney World, a destination we had enjoyed immensely with Eric. This time, it was just the four of us; a time to get away and have some fun. As we were eagerly rushing to Splash Mountain, I suddenly felt something wet on my lips. It startled me and when I realized what had occurred, I emphatically said, “Yuk. A bird just crapped on my lips.” Of course everyone laughed and we hurried to the nearest washroom so that I could clean up.

We eventually arrived at Splash Mountain and as we approached the entrance, a family was walking away and they gave us their fast passes. They had changed their minds about going on the ride, and wanted to offer another family a chance to get on the ride without having to wait in a long line. We gratefully accepted the offer and on we went.

As we approached the entrance to the ride, I suddenly had a revelation. “Oh my,” I said. “It’s Eric!”

“What?” my family questioned.

“Don’t you see?” I probed. Disney World was one of our favourite vacations to take with Eric and the bird pooping on my lips was a little kiss from his to let us know that he was with us in spirit. Additionally, with Eric, we never had to wait in line for a ride. I said that the gift of the fast passes was also a sign. As absurd as this sounded, no one disagreed.

Does my story sound far-fetched? Perhaps. Keep in mind that metaphysical scientists believe that there is no coincidence and that there are thousands of stories that hint at the reality of life after death.

Bob Olson, author of “Answers About the Afterlife”, is a former skeptic and private investigator who began investigating the afterlife after the passing of his father. He has conducted extensive research into the topic and has written numerous books.

He says, “Grief is healing: To take away our grief is to take away our healing. And learning about life after death helps us heal with greater hope, comfort and peace.”
The robin came back to the window the following year. It has not returned since. Does this mean that Eric is no longer around? Absolutely not. His memory and the lessons we learned, the laughs we shared and the tears we shed will never be forgotten.

After the loss of a loved one, many people lose faith. However, the signs are there. It’s up to us to recognize what’s in front of us. Keep your heart and your eyes open.